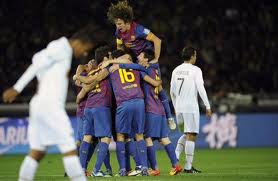 IT was a typical masterclass performance from Barcelona as Santos was comprehensively beaten in the annual FIFA Club World Cup final on Sunday.

Even the most ardent of Santos supporters would have found it hard to disagree that the event was over as a contest within just twenty-four minutes – after Barca had already twice carved open the Brazilian defence, with Messi and Xavi getting on the scoresheet.

Prior to the game I strongly felt that the result was by no means a foregone conclusion. Santos were different to the previous well-drilled São Paulo and Internacional that had tasted success in the 2005 and 2006 Club World Cup’s.

Santos are equipped with players who can create and punish teams, whether it be dead-ball’s from Elano, Ganso’s intricate passing in and around the penalty area or Neymar’s combined ability to run with the ball and ice-cool finishing. The Yokohama final was the ideal opportunity for Santos to represent the fast-improving Brazilian game and make a global statement against a team that rivals, and if not betters, Pele’s Santos of the sixties.

Cesc Fabregas ‘ third for the Barca on the stroke of half-time would have been uncomfortable for Santos fans as the scoreline threatened to destroy the confidence of their team but O Peixe (The Fish) can return to Brazil with their respect and integrity intact, despite Messi side-footing the Catalans a fourth in the final ten minutes to conclude a one-sided 4-0 victory.

On each of the four goals, Santos had simply been unable to cope with the fluidity, movement and philosophy of the Barca machine, which so expertly guided by its chief-operator, Pep Guardiola had been able to choke the life out of any Santos attempt of a counter.

Santos’ Muricy Ramalho, a seasoned coach with a respectable record in his homeland, was equally in awe.

“Barcelona play in a virtual 3-7-0. In Brazil it would be absurd – the police would be called and the coach would be held!,” he quipped.

“We have the custom in Brazil that the number of forwards is an indication of how attacking a team is, but Barcelona prove that you can play well without a striker to score.”

“[This result] has no impact, Barcelona are the best in the world. We have shown our worth, making three finals in a championship season. Barcelona have faced all kinds of teams and no has shown the power to overcome them.”

Santos immediately return back to Brazil where they begin their state championship campaign in less than a month for the start of their centenary season.

Some Santisa’s (Santos fans) still believe their team are the best in the world – it’s just that Barcelona are from another planet.